NASA has released new images of the Perseverance rover two metres above the surface of Mars as it gave more details of the mission.

The US space agency’s robot successfully landed on the Red Planet just before 1pm local time on Thursday.

Speaking at a news briefing in California on Friday, NASA officials revealed the rover landed 2km (1.24 miles) from the ancient river delta it was aiming for.

The team also released the three first colour pictures of the landing, which they hope will go down in history with the likes of Neil Armstrong and Buzz Aldrin on the moon.

One picture shows the rover in its final stages of being lowered on to the surface, just two metres off the ground.

A second, taken by the robot’s front hazard camera, captures the probe’s shadow against the surface, while a third offers a view of one of the wheels and rocks close by.

Deputy project scientist Katie Stack Morgan said the rover has already taken more images “than she can count” and more will be made public on Monday.

Please use Chrome browser for a more accessible video player 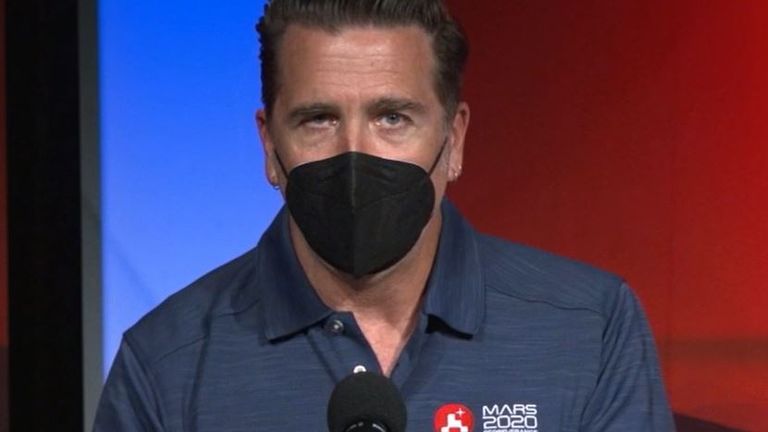 The probe is now exploring the Red Planet’s terrain and sending images back to NASA.

The area around the landing site has been named the Canyon de Chelly, after the Arizona national park, she added.

Describing the moment NASA first saw the images, she said: “The team went wild. We were in a dream-like state, we couldn’t believe what we were seeing.”

Her colleague, chief engineer Adam Steltzner, added: “It was stunning. The team was awestruck and there was a feeling of victory that we were able to capture these and share them with the world.”

Perseverance had been travelling through space for seven months before it entered the Martian atmosphere yesterday.

It then took just seven minutes to touch down, travelling at 12,100mph – or 16 times the speed of sound – towards the surface.

But ground controllers in Pasadena had another agonising 11 minutes to wait before they received confirmation of the safe landing, with radio signals travelling 33.9 million miles between Mars and Earth at the speed of light.

The rover slowed down as it plummeted closer and closer to the surface, releasing a 70ft parachute and a sky crane to lower itself the final 60ft.

NASA chose to land Perseverance near an ancient river delta and former lake known as the Jezero Crater.

Here it will drill deep down into the sediment of where the river once flowed, collecting material that may hold signs of life.

Although the work has only just begun, NASA managers breathed a sigh of relief yesterday that their $2.7bn (£1.9bn) mission didn’t end in a crash landing.