Electric car specialist Tesla has unveiled a prototype for a truck equipped with a semi-autonomous driving system that it will start producing in 2019.

He said the electric trucks were behind the car manufacturer’s latest efforts to move industries away from using fossil fuels.

Tesla’s latest venture has been greeted with some trepidation from analysts, who fear it could be an expensive distraction for the company, which has never published an annual profit.

It also has to convince the trucking business it can build an affordable electric truck with the cargo capacity to compete with cheaper diesel alternatives.

Video: Tesla’s electric truck Semi to go into production in 2019

Musk has not yet revealed a price for the electric prototype.

But he said the trucks could go for up to 500 miles at maximum weight at motorway speeds, despite fears heavy batteries could eat into the weight of cargo capacity.

Its diesel counterparts are able to travel up to 1,000 miles on a single tank of fuel, but Musk said diesel trucks were 20% more expensive to run per mile.

Without cargo, the Semi can do 0 to 60mph in five seconds or reach 60mph in 20 seconds while carrying the maximum weight allowed on US highways – more than 36,000kg. 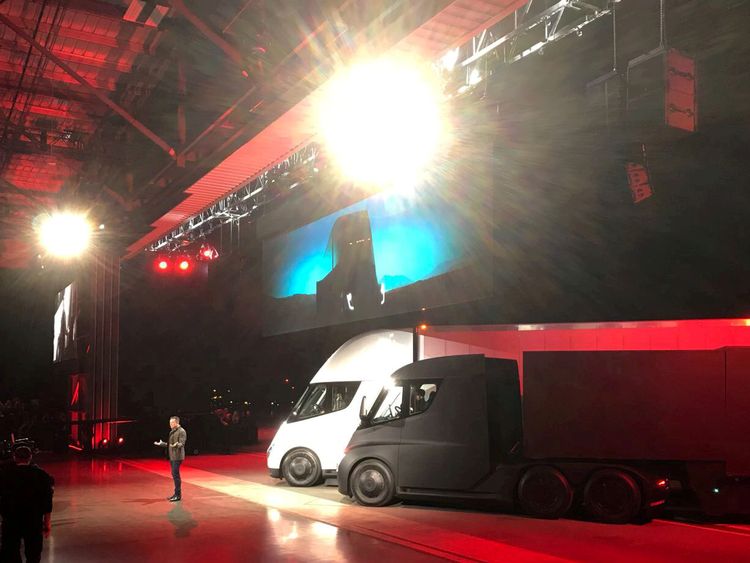 Tesla also showed off the Class 8 truck, which is capable of hauling any kind of freight, to reporters. Class 8 is the heaviest weight classification for trucks.

It comes equipped with a semi-autonomous driving system designed to prevent the truck drifting out of its lane as well as enabling it to switch lanes on command.

Ahead of the launch of the truck, which can travel 400 miles on a 30 minute charge, Musk tweeted: “This will blow your mind clear out of your skull and into an alternate dimension.”

Tesla also unveiled its new Roadster model, which can go from 0 to 60mph in 1.9 seconds.